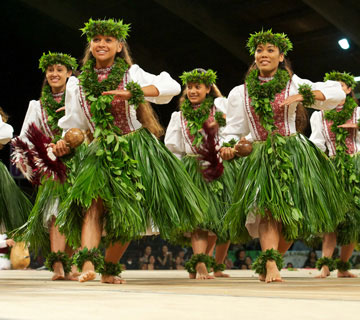 The Merrie Monarch Festival is Hawaii’s most venerable hula celebration and internationally acclaimed competition. The 57th annual event will take place from April 12-18, 2020, at the Edith Kanakaole Tennis Stadium in Hilo on the Big Island. There will be week-long festivities including arts & crafts fairs, exhibits and musical entertainment, as well as the Miss Aloha Hula Competition. Tickets are available at http://www.merriemonarch.com

The Merrie Monarch Festival is named after King David Kalakaua, who was known as the “Merrie Monarch” for being very fond of the arts. He is credited with restoring many of Hawaii’s most beloved cultural traditions, including the hula. King Kalakaua was the last king of the Kingdom of Hawaii. He reigned from 1874 until his death in 1891.

The first Merrie Monarch Festival was held in 1963. The annual week-long event has received worldwide attention in the past and is considered the most prestigious of all hula contests. Proceeds of the festival help support seminars, symposiums and educational scholarships, as well as the continuation of the event itself.

For more information about Big Island activities and things to do, visit us at HawaiiDiscount.com or call 1-866-482-9775.